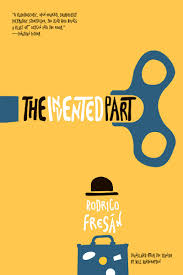 The latest addition to my website is Rodrigo Fresán‘s La parte inventada (The Invented Part). This is a long, rambling novel, the first of the trilogy, about Fresán’s favourite subject – writers and writing. We follow the story of the Writer and his career, from his childhood to his later life, when his writing is not as successful as it had once been. We also follow the story of his mad sister, Penelope, and her association with the colourful Karma family. But we also follow the stories of various writers, both real (William Burroughs and F. Scott Fitzgerald being the main ones) and fictitious. We learn about how and why writers write, including using their friends and families as source, as both our writer and Fitzgerald did. Perhaps not entirely surprisingly, it all ends up in the Large Hadron Collider in Geneva. It is rambling and colourful and inventive and a long read.