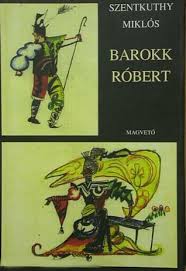 The latest addition to my website is Miklós Szentkuthy‘s Barokk Róbert [Robert Baroque]. Though only published three years after his death, this is an early work, written when he was eighteen (and, apparently, never revised or even reread). It is essentially an autobiographical work about his eighteenth year and includes his home and school life, the conflict between his religious feelings and his lustful feelings towards young women and his desire to be a writer. He has many ideas for novels, stories and even a play, which he shares with us but which never get written. He also often veers off into flights of fantasy about his life, his writing and the young women he is attracted to. While not a great work, it is interesting to see what the young Szentkuthy was like and how his lurid imagination carried him away even then.