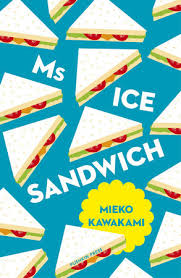 The latest addition to my website is Mieko Kawakami‘s ミス・アイスサンドイッチ (Ms Ice Sandwich). This is a charming novel about a ten year old boy, an only child whose father died when he was four, who is struggling with growing up. He takes a fancy to a woman he nicknames Ms Ice Sandwich, who works at the sandwich bar in the local supermarket, though he is too shy to speak to her, except to order a sandwich (which he often does not eat). It is a girl of his own age – nicknamed Tutti Frutti – who does more to introduce him to the opposite sex, when she invites him to her house to watch her father’s DVD collection and, in particular, Heat, with its frequent shoot-outs, which appeal to Tutti Frutti. Haruki Murakami praised Kawakami but while I found this novel a pleasant read, I cannot share Murakami’s enthusiasm.