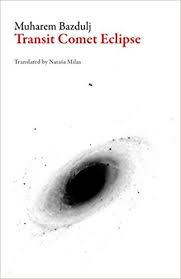 The latest addition to my website is Muharem Bazdulj‘s Tranzit, kometa, pomračenje (Transit, Comet, Eclipse). This consists of three related novellas essentially about the situation in East Europe. The first is set in the eighteenth journey and tells of the journey of the scientist Ruđer Bošković to Saint Petersburg (he does not make it but gets a long way, before falling down a well in Poland). Twice he tries to see the Transit of Venus, once before and once after his journey but fails both times. Bazdulj uses his journey to comment on various aspects of Eastern Europe, including the relationship with the Ottoman Empire, which controlled much of the region, Christianity and how the region is seen from East Europe and vice versa. The other two are set in modern times, one about an innocent Moldovan woman whose innocence and lack of opportunities in Moldova is taken advantage of and the third telling how The Writer came to write this book. It is certainly an interesting approach but it is the first story that works best for me.