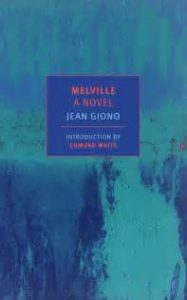 The latest addition to my website is Jean Giono‘s Pour saluer Melville (Melville: A Novel), published in French in 1941 but only published this year in English. It was intended, initially, as an introduction to Giono’s translation of Moby Dick into French but was expanded into a short novel, with Giono inventing a fanciful story about Melville. The story, essentially, concerns Melville’s visit to London to get his novel White Jacket published. Once he has handed over the manuscript, he has two weeks to kill, so decides to set off for the (fictitious) Woodcut, near Bristol as a young man said that is what he would do do, if he had the time and money, as his girlfriend lived there. Melville decided to go there himself but, en route, he meets an Irish nationalist woman, helping the Irish during the Great Famine and the two become, briefly, quite close. It is combination of this woman and his guardian angel (yes, really) that inspires him to write Moby Dick. He returns to the the United States but never forgets her. The story is quite untrue but certainly an interesting fantasy.