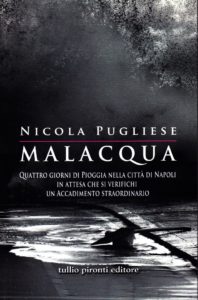 The latest addition to my website is Nicola Pugliese‘s Malacqua (Malacqua). It tells a story of Naples over four days when it rains continually and heavily. While this could have been a straightforward catastrophe novel, Pugleise’s superb writing gives it an aura of a religious apocalypse, with cars disappearing into a chasm, a haunting screeching noise which turns out to be coming from a doll, with other identical dolls found at other catastrophe locations, and a house collapsing, killing the inhabitants. All the while we follow a journalist, a passive observer, as much concerned with his own issues as with the rain, we also follow a succession of other characters, all of whom seem to be living in a strange world of their own. It is a brilliant and very original novel, Pugliese’s only novel, and we must be grateful to And Other Stories that it now appears in English. Already – yes, early November – in the Spectator’s Best Books of the Year, Anna Aslanyan describes it as this year’s strangest and most seductive book. I can only agree with her.