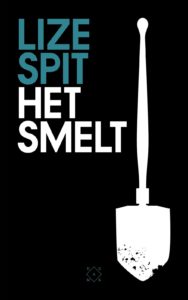 The latest addition to my website is Lize Spit‘s Het smelt [The Melting]. This is a début novel by a young Belgian writer and a superb novel it is. Surprisingly for a début novel, it has already been published in three other languages, with two more early next year and rights sold in several other languages, including English. It tells the story of Eva who lives in a Belgian farming village We learn a lot about her, her family and friends but follow, in alternating chapters, her story in the summer of 2002, when her two close male friends, Pim and Laurens, started behaving very badly and dragged her along with their behaviour, culminating in a traumatic event for all three, and also the present day when she is invited to an event where, it seems she will try to get her revenge for what happened in 2002. Spit gradually reveals bits of the puzzle – what happened that day, what is Eva planning, what happened to Eva’s sister, why did Pim’s brother really die – and shows a conventional Belgian village which hides many grim secrets.