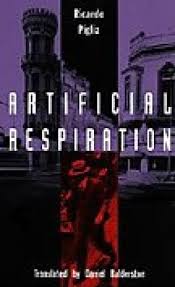 The latest addition to my website is Ricardo Piglia‘s Respiración artificial (Artificial Respiration). This novel, published during Argentina’s Dirty War, goes around that issue, focussing on history and literature and, using, to some degree the detective novel form. The first part involves an exchange of letters between writer Emilio Renzi and his uncle Marcelo Maggi. Renzi had learned from the family that Maggi had stolen money from his wife and run off with a dancer. It seems that the real story is more complicated, involving politics. Maggi is writing a book about Enrique Ossorio, who worked in the early nineteenth century for an Argentinian dictator, while spying against him for the opposition and the aggrieved wife is the great-granddaughter of Ossorio. In the second part of the book Renzi goes to meet his uncle but does not find him but has long discussions, primary about literature with his uncle’s friends. The book is enigmatic, discursive and one of the great Argentinian novels.