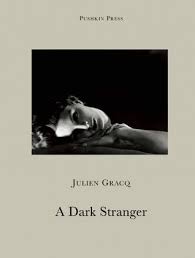 The latest addition to my website is Julien Gracq‘s Un beau ténébreux (A Dark Stranger). This is is Gracq’s second novel, published soon after the war, and after Gracq had spent some time in a German prisoner-of-war camp. The novel is set in a fictitious Breton town, where there is a hotel for well-to-do intellectuals on holiday. It is mainly narrated by Gérard, a literary dilettante, about the small group of people he associates with. The men are initially enamoured of Christel but when Allan Murchison (English father, but naturalised French) arrives with the beautiful Dolorès, things change. Allan is athletic, intellectual, clever, rich and elegant. The women fall for him as the men do for Dolorès. However, there is clearly something else going on as there is a morbid sense of doom. Allan talks of suicide, recklessly spends all his money and even frightens away his childhood friend, Gregory, who does not want to be a witness to whatever is going to happen. Gérard’s narration ends and the third party narrator fills us in. While not Gracq’s best novel, it is certainly well-told, though somewhat morbid. 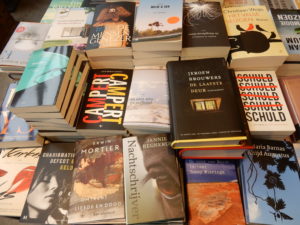 Just back from a few days in the Netherlands. Though we visited a few cities, it is The Hague that was most interesting from the literary point of view. As you can see from the photo of the display of new books in a bookshop to the left, there are new books from writers already published in English, including Arnon Grunberg with Moedervlekken [Birthmarks] about a psychiatrist who specialises in suicide prevention dealing with his own personal problems, Tommy Wieringa with De dood van Murat Idrissi [The Death of Murat Idrissi] about an illegal immigrant dying in the boot of a car, Jeroen Brouwers with De laatste deur [The Last Door], a substantially revised and expanded version of a book he first published thirty years ago, also about suicide, the Flemish writer Erwin Mortier with Omtrent Liefde en Dood [About Love and Death], letters the author writes to a recently deceased couple about, what else?, death and, though not visible in this picture, a collection of essays by Connie Palmen called Het drama van de afhankelijkheid [The Drama of Dependency].

The Mauritshuis art gallery in The Hague has two paintings which have been the subject of recent novels. The Girl With the Pearl Earring was a novel by Tracy Chevalier. I have not read it but my significant other has read it and she found it somewhat sad. It was also, of course, a film. We both read and enjoyed Donna Tartt‘s The Goldfinch and you can see the painting that was stolen in the book, to the right. Fortunately the Japanese tourists were crowded around The Girl With the Pearl Earring and ignored The Goldfinch.

Purely by chance I discovered the Literary Museum in The Hague. It was not mentioned in the Lonely Planet guide and the lady in the tourist office could tell me nothing about it, as she had not visited it for many years (which I took to mean that she had not visited it at all.) It is just behind the Centraal station, in the Royal Library. I can see why Lonely Planet does not mention it, as it is only about Dutch and Flemish authors and there is very little in English. There are two parts. The upstairs is for children’s literature, which I did not visit but was packed with screaming children and their parents. The adult section was downstairs and had three sections. The first was what they called a pantheon. It had an entry for each of the greatest Dutch authors. These consisted of a couple of pictures and an audio recording you could listen to about the author. Inevitably most of the recordings were only in Dutch, but there were a few in English (Erasmus, Multatuli and Anne Frank, for example). You can see a complete list of the authors on their website. The list is in alphabetical order but in the museum it was in reverse chronological order. 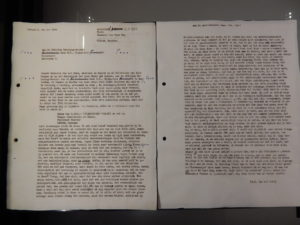 The second section was documents, first editions and so on relating to various authors. The document to the right is a letter Gerard Reve wrote to his bank. This is no ordinary letter to one’s bank. Much of it is rambling and completely inappropriate in a letter to one’s bank. (You can read the full text (in Dutch) here.) However, there is one passage in which he talks about having sex with God. As a result of this, he was charged with blasphemy though was acquitted. There are also various court transcripts, newspaper clippings and so on relating to the case.

The third and perhaps most interesting section was a series of portraits of over four hundred Dutch and Flemish writers. These were portraits, in a variety of styles, of living, dead and long since dead Dutch authors. The one to the left, for example, is of Willem Frederik Hermans which, as you can see from his Wikipedia page appears to be somewhat imaginative. Similarly, the one of Gerard Reve above left is not an accurate portrait of him, at least according to the photos on his Wikipedia page. I assume that the authors themselves approved these paintings. Amazingly enough you can buy a book of all the portraits. It is quite small but contains every portrait and costs the princely sum of €2.50. I must admit that I have heard of relatively few of these authors but, as you can see from the two portraits on this page, the portraits were often interesting in themselves.