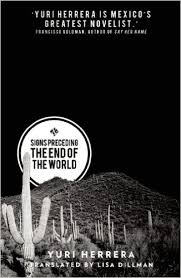 The latest addition to my website is Yuri Herrera‘s Señales que precederán al fin del mundo (Signs Preceding the End of the World). This is a superb short novel which can be read as Dantesque journey through the underworld or as the story of a woman illegally entering the United States from Mexico, not to live and work there but to deliver a message to her brother from her mother. Makina lives in a small silver mining town and works as the local switchboard operator. Her mother asks her to deliver a message to her brother in the United States. To do so she needs the help of various people and has to deliver a mysterious package (presumably drugs). She has a series of adventures, including nearly drowning in the River Styx/Rio Grande, seeing dead bodies and being shot and hit but, miraculously surviving seemingly unscathed. Once in the United States, the journey is somewhat like Dante’s journey in the circles of Hell, as she looks for her brother, failing to track him down, till she finds him in the US army. Herrera tells his story very well, giving us both the mythic dimension and the grim reality of life for Mexicans trying to enter the United States.