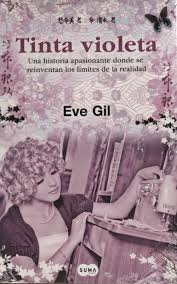 The latest addition to my website is Eve Gil‘s Tinta violeta: Sho-shan segunda temporada [Violet Ink: Sho-shan second season]. Gil has called this novel, and others she has written, mangic realism, as manga/anime features very much in the story. Eve Gil’s youngest daughter has Asperger’s Syndrome, as does the heroine and part-narrator of this novel Luisa. She is almost fifteen and lives with her grandparents in the United States, though she is Mexican. Nine years previously her mother was murdered. Part of the novel is the quest to find out why she was murdered. Her older sister, Violeta, and her father (who is not Violeta’s biological father) have gone to Japan, where Violeta has become a successful manga/anime writer. Violeta invites Luisa to visit her in Japan and she reluctantly accepts. Meanwhile we seem to be a following a manga story, which seems to be related to Luisa’s life and may be the one written by Violeta. However, it turns out to be very real and the two sisters unwittingly get involved in it. Gil gives us an excellent portrait of the world as seen by someone with Asperger’s as well as showing the merging of reality and fantasy, using manga/anime to do so. Sadly none of Gil’s work has been translated into English.