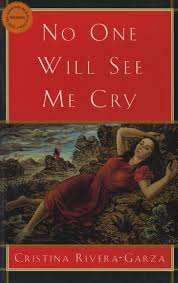 The latest addition to my website is Cristina Rivera-Garza‘s Nadie me verá llorar (No One Will See Me Cry). The novel is set at the end of the nineteenth and beginning of the twentieth century and its main but by no means only focus is on Joaquín Buitrago, a man who works as photographer in a large mental institution in Mexico City and one of the patients he photographs, Matilda Burgos. Joaquín came from a well-to-do family but, like most of the characters in this book, had had an unhappy love affair and things had gone badly ever since. He is now a morphine addict. Matilda came from a poor family. Her parents are drunk. As a teenager, she moved to Mexico City to live with her aunt and uncle. Her uncle was a hygiene obsessive. Matilda became involved with a group fighting for social justice, led by the woman who was Joaquín’s first love. She disappeared from Matilda’s life as she had disappeared from Joaquín’s and, eventually, Matilda ends up a prostitute, before living in a remote town with a strange US engineer. Even when Joaquín rescues her from the asylum, things do not work out as planned. A summary of the ideas would be that social justice in Mexico is limited, particularly for women, that love is not the answer and that insanity is not limited to mental institutions. It may see grim and often it is, but Rivera-Garza tells a good story.