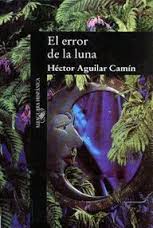 The latest addition to my website is Hector Camín‘s El error de la luna [The Moon’s Mistake]. This tells the story of the nineteen year old Leonor Gonzalbo, whose parents have been killed in a car crash and who is now living with her grandparents. Leonor becomes obsessed with her late aunt, Mariana, whom she resembles and who died in mysterious circumstances, possibly as a result of a love affair with a man who cannot be mentioned. She endeavour to get information from her grandparents and from her two surviving aunts but is fobbed off. She learns that there is a family curse, passed down through the female line and Mariana was a victim of this curse but no-one will tell her how and why she died or about the affair she may have had. She gradually manages to speak to various people but gets a somewhat different version of the story from everyone, as people either do not know, have something to hide or see things from a different perspective. Meanwhile, she is herself following her female ancestors in a not very successful relationship. As always, Camín tells an excellent story, showing that reality has many facets and that truth is not easy to come by. Like all but one of his books, this book has not been translated into English.