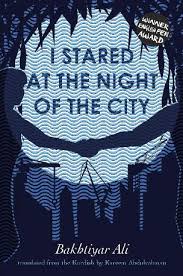 The latest addition to my website is Bakhtiyar Ali‘s Ghazalnūs wa bāghakānı̄ khayāl (I Stared at the Night of the City). This is an absolutely brilliant, complex, long, magic realist novel, set in an unnamed Kurdish city but, presumably, the author’s home town of Slemani (Sulaymaniyah) . The basic theme if that kings need poets but poets do not need kings. On the one hand there is a group of highly imaginative people who are wring a massive book paying tribute to the recent dead – the women set on fire, those murdered by the evil barons that control the country and many others – and, on the other, there are the evil barons, with titles like the Baron of Imagination and the Baron of Courgettes, who rule the country, though most Kurds are unaware of their existence. Our three heroes – Ghazalnus (writer of ghazals), Trifa who dreams up highly imaginative and original carpets, and a man known as the Imaginary Magellan as he travels the world, often with a group of blind children, but entirely in his imagination – travel the world of imagination and, with others, oppose the barons. The barons can rule the world and they can and do kill their opponents but imagination must triumph if the world is to survive. This is one of the best novels I have read for a long time and I urge you to read it. We must be grateful to Periscope Books for giving us the first novel translated from Kurdish into English and can only wish for more.