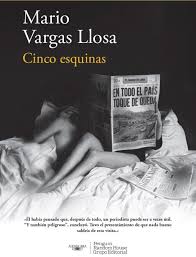 The latest addition to my website is Mario Vargas Llosa‘s Cinco Esquinas [Five Corners]. Sadly this book confirms what we have known for a while, namely that Vargas Llosa’s talents have waned as he has got older. As you can see from the cover at left, soft-core porn features in the book (the newspaper headline reads Curfew throughout the country, which occurred during the period of terrorism under the presidency of Alberto Fujimori), though it is not particularly relevant to the story and seems mainly gratuitous. However, if lesbian soft-core porn is your thing, I am sure that you can find better examples elsewhere. The basic plot concerns a scurrilous journalist who tries to blackmail a rich and successful businessman (husband of one of the two women in the picture having a lesbian romp) as he has photos of the man with naked prostitutes. The businessman refuses to pay and the journalist publishes the photos. Much of the book is about the fall-out from this, which reaches to the heights of the Peruvian government and has devastating effects on several of the characters. The plot is fairly interesting and with one or two twists but far from being Nobel Prize calibre. Frankly, it is time for Vargas Llosa to retire.