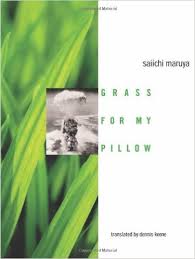 The latest addition to my website is Saiichi Maruya‘s 笹まくら (Grass for My Pillow). This is an excellent novel about a somewhat taboo subject in Japan: draft desertion. Shokichi Hamada is currently the assistant chief clerk in the registry office of a university. However, during the war, he decided not to serve and travelled around Japan (with a beard) working first as a radio and clock repairer and then as a sand artist. During his travels, he met Akiko, and they stayed together for the duration fo the war but, after the war, her mother made an arranged marriage for her and Hamada returned to Tokyo. While he has not deliberately hidden his war-time exploits, he has certainly tried not to mention them. When there is a possibility of promotion, the word gets out and starts to cause problems, even though quite a few people support him. We follow both his war-time travels and his current life and, in particular, how he deals with the issue of his draft resistance affecting his life. Maruya tells his story very well, as Hamada struggles with how to react to the rumours and whispering.