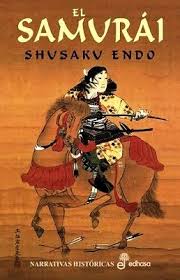 The latest addition to my website is Shūsaku Endō‘s 侍 (The Samurai). This novel is based on a true story and tells the story of a Japanese expedition in the early sixteenth century to Nueva España (modern-day Mexico) and then to Europe. The Japanese are trying to establish a direct trade connection between Japan and Nueva España while the Spanish, led by the Franciscan monk, Velasco, want to be allowed to proselytise Christianity in Japan. For reasons which are not clear either historically or in this novel, a group of low-ranking samurais are sent as the Japanese envoys on the expedition and they have a throughly miserable time as they depend on the scheming and often dishonest Velasco to interpret for them and to show them the culture, they hate the travel and have a series of calamities, they do not understand or like the Spanish-speaking world, they have no idea why they are on the expedition or what exactly is expected of them and are thoroughly homesick. Velasco does not fare much better, as he is caught up in the politics. You can read this novel as a well-written historical adventure as the Japanese did and as I have done or as a Christian work, as has been more the case in West. In both cases, it has been a successful novel.