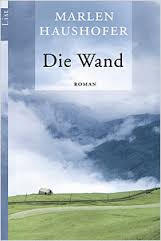 The latest addition to my website is Marlen Haushofer‘s Die Wand (The Wall). The story tells of an unnamed woman who is to stay with friends in a hunting lodge at the edge of the Austrian Alps. The plan is that she will arrive early and they will join her in the evening. They do not turn up that evening or ever. When she descends the gorge, at the end of which the lodge is located, to investigate, she finds an invisible wall, seemingly of infinite length, which prevents her from passing. She can see the village and neighbouring farms through the wall and she can also see two people on the farms and the cows, motionless and obviously dead.No-one comes to rescue her and no-one turns up. She adopts a small menagerie – her hunting dog, a cow (and later her calf) which she finds wandering and in need of milking, and a cat (and, later, her kittens) and they become her family. Fortunately, the lodge owner had prepared for a possible nuclear war, so it is well-stocked with supplies and she is able to grow beans and potatoes, forage, and hunt the plentiful deer on the mountain slopes. The book tells of her struggles, both physical and mental, dealing with this situation, all written down in a notebook. She adapts to the solitude, gradually forgets the past but also wonders whether it is worth going on. Because of the menagerie, she decides that she must make the effort to carry on living and surviving. But stocks (including paper for the notebook) are starting to run low.