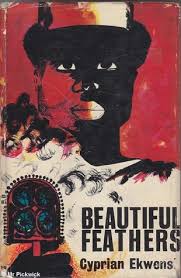 The latest addition to my website is Cyprian Ekwensi‘s Beautiful Feathers. This tells the story of Wilson Iyari, a man who runs a successful pharmacy and is head of the Nigerian-based Movement for African and Malagasy Solidarity but, as the Igbo proverb says, if he is not respected inside his own home, he is like a bird with beautiful feathers, wonderful on the outside but ordinary within. Wilson is married to the glamorous Yaniya and they have three children but the couple barely speak to one another. He feels that she neglects her wifely duties while she feels he neglects her and does not assist her relatives enough. At the start of the book, the Movement is about to have a major, peaceful demonstration on Nigerian Independence Day to call for greater African solidarity but Yaniya, feeling neglected, is having an affair, primarily to annoy Wilson. When he runs away with the children and the demonstration turns out to be anything but peaceful, things go very wrong for Wilson. Can he reconcile his public and private life, both to the satisfaction of Yaniy and himself? It is interesting that an African novel from 1963 does, sort of, raise the issue of women’s rights, i.e. the right to have her life of her own, beyond being just a wife and mother.