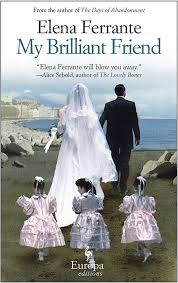 The latest addition to my website is Elena Ferrante‘s L’amica geniale (My Brilliant Friend). This novel has had considerable success, both in English and Italian and, with the fourth in the L’amica geniale (My Brilliant Friend) series) coming out in English next month, I felt that it was time I read it. The first reason for its success may be because of the mystery surrounding the author. Her identity is unknown and she has made it clear that she intends to keep it that way. It would appear, from what information we have, that she is from the Naples area, grew up there in the 1950s/1960s and is a mother. Of course, all this is supposition and she may well be a twenty three year old man from Florence or even Silvio Berlusconi. Authors whose identity are not known are not unheard of. We do not know who wrote the Gospels or who Sir Thomas Malory is. For some time there was a lot of speculation about the author of the novel Primary Colors, though his identity has now been revealed. Similarly, we now know who wrote Robert Galbraith is. We have an idea who B Traven is but it is not certain. And who is James Church? The second reason for the book’s success is the excellent publicity that the English-language publishers, Europa Editions, have given the book. 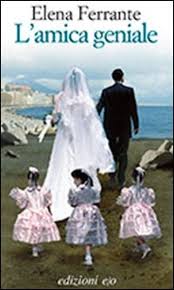 The third reason is the story itself. The book is about the friendship between two girls – Lila and Elena (the narrator). They met when they first went to school and have remained friends till later in life. (The book is a flashback from when they are much older.) Elena remains in awe of Lila. It is Lila who is brave and tough as well as being very clever. As a young child, Elena follows Lila in somewhat brave and occasionally foolhardy adventures, even if it may be against Elena’s better judgement. At school, Elena does very well but Lila does better. She teaches herself to read and write and later will teach herself Latin and then Greek, primarily in order to help Elena learn. While Elena reaches puberty earlier and has large breasts and therefore is initially able to attract boys before Lila, Lila soon reaches puberty and it is she who has more success with the opposite sex. This story is told against a background of continuing conflict, which often breaks out into violence, as families and individuals assert themselves, control their children and openly fight. Somehow the two girls triumph and, by the time the book ends, when they are sixteen, have more or less come through.