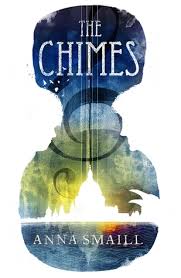 The latest addition to my website is Anna Smaill‘s The Chimes. I have been sitting on this for several months but am inspired to read it as it made The Man Booker longlist and, as I have only read two others on the list (both, interestingly enough, by women), I felt that I should get round to this one. It is a post-apocalyptic, dystopian novel, something which seems quite popular at the moment. It is set mainly in London (though later moving to Reading and then Oxford), which has been damaged by something called the Allbreaking, whose nature is not entirely clear but seems to have involved some powerful sounds that destroyed buildings and killed people. The new ruling class, called The Order, seem to be a quasi-religious group, that use sounds to control the people, who must listen every day to the Onestory and The Chimes, sounds played by some form of musical instrument, with the latter having the effect of destroying people’s memories. Memories, except for bodymemory, i.e. the normal functions of the body, tend to be illegal, though people sometimes have memory bags containing objectmemories, i.e. objects that remind them of their past.

Our hero is Simon Wyvern, a young lad who has a gift (highly illegal) of reading people’s memories, inherited from his late mother. After the death of his parents, he comes to London from Essex, where he joins a pact (i.e. a gang) which hunts The Lady, i.e. palladium, which the Order needs. The story takes a reasonably predictable path, as Simon and Lucien, the leader of the gang, concoct a plan to bring down The Order by clever means. However, what makes this novel different is Smaill’s use of music. Smaill has had formal musical training and she puts that to good use in this book. Since The Allbreaking, communication is as much by music and singing than by words. We see how the gang use music to set a path and follow where they and others are going. People use it to communicate everyday issues and of course, the Order uses it to control the populace. I am not sure whether that is enough to win her the Man Booker Prize – I suspect not – but it does enliven an interesting post-apocalyptic story.