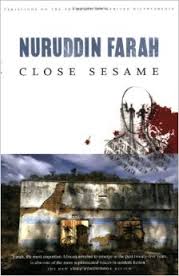 The latest addition to my website is Nuruddin Farah‘s Close Sesame. While we are again dealing with opposition to the Somalia dictatorship, this one is slightly different from many of his others, in that the main character is not a Somali expatriate returned home. The story centres around Deeriye. He is now an elderly man, living with his son, Mursal. He had been appointed to be head of his clan when very young and almost immediately faced his first problem The Italian colonisers were looking for a man who had killed an Italian officer, apparently in self-defence. They have learned that Deeriye’s clan is sheltering him. However, Deeirye refuses to give him up. As punishment, the clan’s cattle are slaughtered and Deriye is sent to prison. He will spend twelve years of his life in prison, both before and after independence. However, he has always espoused non-violence. However, he now learns that Mursal, and three other young men, including Mahad, son of the man who killed the Italian and nephew of Rooble, Deeriye’s best friend, are planning some sort of violent attack. He initially opposed any sort of violence but gradually changes his views when faced with the reality of the situation. The history worth studying is one of resistance, not capitulation and all great men have one thing in common: the shaping force of their lives has been resistance is a phrase Mursal quotes back at him having learned it from his father. It covers much of the same ground as his previous novels but Deeriye’s doubts and soul-searching certainly make it one of Farah’s more interesting novels.