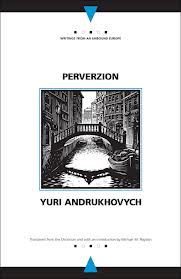 The latest addition to my website is Yuri Andrukhovych‘s Перверзія (Perverzion). This is a wonderful post-modern romp, telling the story of what may be the last week in the life of Stakh Perfetsky, poet, dandy, trickster, performer, traveller and, of course, lover. He is giving a speech at a conference in Venice called The Postcarnival Absurdity of the World:What is on the Horizon? From the very beginning we learn that he may have died, either by jumping into or being pushed into the canal. However, no body has been found. We follow his colourful journey to Venice, driven by a urologist and his wife, Ada Zitrone, whose family, like Sakh, were originally from the fictitious Chortopil (i.e. devil’s town). Ada is to act as his interpreter (and also spies on him). After his death/disappearance, the author has managed to amass a variety of documents, some by Stakh, some by others, which tell what he did in that last week, in particular, what happened at the conference. As a good Ukrainian poet, sex and drink take up much of his time. He also falls in love (with Ada) but is also fearful of death and that someone is after him. Andrukhovych mocks the participants, Venice, Ukrainian politics and Stakh, while telling a funny and thoroughly chaotic story of sex, love, politics, literature and the other finer things of life (and death). The good news is that his Дванадцять обручів looks set to appear in English translation next year as Twelve Circles/