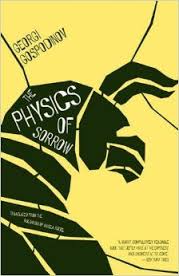 The latest addition to my website is Georgi Gospodinov‘s Физика на тъгата (The Physics of Sorrow). This is a postmodern novel narrated by the author or, at least, a man called Georgi Gospodinov, about his life and the life of his father and grandfather. The narrator initially identifies not only with himself but with his father and grandfather and we learn, in particular, about his grandfather’s exploits in World War II when he stayed with a Hungarian widow at the end of the war. Much of the novel is about the narrator’s life, his thoughts, his obsessions (minotaurs and labyrinths), his feelings about Bulgaria during the period when he was growing up (primarily the 1980s), a decidedly love-hate relationship. He tells stories, make lists, rails against the Bulgarian political system but feels nostalgia for his childhood and even goes back to the small town he grew up and stays there. As he says I can’t offer a linear story, because no labyrinth and no story is ever linear and this one certainly jumps around. If I had to sum up in a few words what it is about, it is about that standard theme, a man trying to find himself, who he is and what he is and his place in the world. Inevitably, that is not a straightforward task.