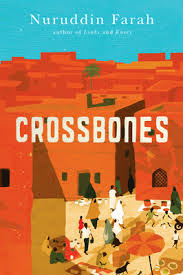 The latest addition to my website is Nuruddin Farah‘s Crossbones, the third book in his trilogy about Somalia at the beginning of this century and the the efforts of expatriate Somalis visiting the country to improve things. This one sees three visitors – Jeebleh, who visited ten years previously in the first novel in the trilogy, Malik, his son-in-law, who has never been to Somalia before but who is a journalist and plans to write about the current situation and Ahl, Malik’s elder brother, who is looking for his sixteen year old stepson, who has become a jihadist. The situation in Somalia has changed, with the Islamic Courts Union in power, aided by their aggresive youth wing, Shabaab. Women have to wear the veil and can be punished if they are inappropriately dressed. Ahl heads out to Puntland to try and track down his stepson, with the help of some decidedly unpleasant people, while Malik risks the wrath of Shabaab, who have made a habit of killing Western journalists, by writing about what is going on in Somalia. This book is particularly interesting, as it shows what is happening in Somalia outside Mogadishu, it gives a rationale or even a justification for their piracy and it shows some recent developments in Somalia, some positive but many not. Indeed, the background on Somalia is perhaps more interesting than the plot itself.