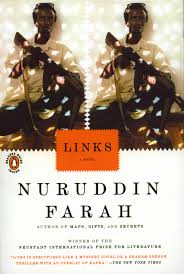 The latest addition to my website is Nuruddin Farah‘s Links, the first book in a trilogy about the disastrous situation in Somalia, at the beginning of the 21st century. The basic story line in all three books is the arrival in Mogadishu of one or more expatriate Somalis, who had been living in Canada, coming either to investigate the situation, or with some sort of agenda, which we gradually learn during the course of events. In this book, Jeebleh arrives in war-torn Mogadishu, from Canada. He had been brought up by his mother who, at the same time, helped bring up Bile and Caloosha, two half-brothers. Both Jeebleh and Bile had been imprisoned during the dictatorship, possibly at the instigation of Caloosha. Jeebleh had been unexpectedly released and sent into exile. Bile, a doctor, had remained in prison till the end of the dictatorship, when all prisoners had been freed. He has since opened a refuge for war orphans but continues to have health issues from his time in prison. Caloosha is now a minor warlord. Shortly before Jeebleh’s arrival, Raasta, Bile’s charismatic niece, had been kidnapped. Jeebleh, we learn, is in Mogadishu to locate his mother’s grave and to honour her, and to find her housekeeper, who seems to have disappeared. He reluctantly elicits Caloosha’s help. Inevitably, he gets involved in tracking down Raasta. Farah gives us a very detailed portrait of the chaos in Mogadishu, the background to the war and the ongoing civil war, happy to attribute blame to all the key players, while showing that the way out is positive action by ordinary people.