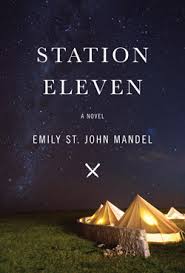 The latest addition to my website is Emily St. John Mandel‘s Station Eleven. This book has been shortlisted for the US National Book Award, with the winner to be announced 19 November. This is a post-apocalyptic novel, but don’t let that put you off. As you will see in my review, there are a already a few post-apocalyptic novels on this site and they are generally very well written and intelligent, as is this one. They do not all have to be pitched battles between good and evil nor Space Westerns consisting of lone cowboys ridding the universe of evil-doers. The apocalypse is caused by an outbreak of a pandemic called Georgia Flu, which kills off around ninety-nine percent of the world’s human population in a very short time. The main survivors in this story all have some connection with Arthur Leander, a successful Canadian film actor who dies of a heart attack on stage, while playing King Lear, just as the pandemic is breaking out. Two of the survivors, Kirsten Raymonde, then eight years old and appearing in King Lear with Leander, and Jeevan Chaudhary, former paparazzo, who had stalked Leander but is now a paramedic and audience member, both witness Leander’s death. After the pandemic, Kirsten joins the Travelling Symphony, a troupe of both musicians and actors, who travel round what was the North-West of the United States, playing and performing in the scattered towns where there are survivors. All had been going well, till, in one town, they found that a man who called himself The Prophet had taken over and was terrorising the area. The Symphony has conflicts with him, causing them all sorts of problems. Meanwhile we follow the life of Arthur Leander, his rise to fame, his three marriage and divorces, and his contacts with the people who will survive. We also learn of a flight rerouted to Severn City Airport, as the pandemic breaks out, which will never leave the airport and how the survivors settle and survive there. Mandel tells an excellent story but also raises issues such as memories, loss of memories and recovery of memories as well as the issue of how music, Shakespeare and the determination that survival is not enough can help put back together a broken world.