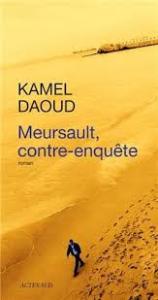 The latest addition to my website is Kamel Daoud‘s Meursault, contre-enquête [Meursault, Counter Investigation], part of my effort at reading literary prize winners/shortlisted writers other than the Man Booker. This book has already won the prix François Mauriac, not to be confused with the prix François Mauriac and the Prix des cinq continents de la Francophonie but is also on the shortlist for the Goncourt and the Prix Renaudot, the winners of which will be announced 5 November. Please note all links to prize sites are in French.

This is a superb novel and is an Algerian response to Albert Camus‘ L’Etranger (UK: The Outsider; US: The Stranger). The story is narrated by an Algerian, called Haroun, talking nominally to a French academic (who turns out not to be an academic) in a bar in Oran. Haroun is the brother of the Arab murdered in the Camus novel and this murder has affected his entire life. He is bitter not only at the murder but by the fact that the book does not mention the victim by his name or any other details, except that he is An Arab. The murdered man is called Moussa and was murdered when Haroun was only seven. He is bitter also by the neglect of Moussa’s suffering and the focus on the problems of Meursault, the murderer, that his mother was never given Moussa’s body to bury (an empty coffin was buried, forty days after his death) and that his mother has spent the rest of her life trying to find out more about the murder, neglecting her younger son. We also follow his life, which has not been a great one. Daoud does throw in one interesting twist, which livens things up. It really is an excellent book, showing both French racism towards the Algerians, damning Camus and Meursault, yet, at the same time, being somewhat critical of Algeria and Algerians (Daoud has made his living by being an outspoken journalist, often critical of his own country). As it has only recently come out in French, it has not been translated as yet but I would be disappointed if this book did not make it into English. Update: the English-language rights have apparently been bought by OneWorld.