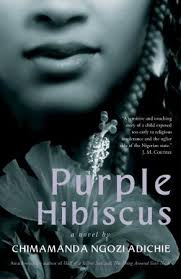 The latest addition to my wesbite is Chimamanda Ngozi Adichie‘s Purple Hibiscus, her first novel. I was a bit disappointed with this book, as it was a bit unsubtle, telling the story of a teenage Nigerian girl, Kambili, and how she had suffered at the hands of her very rich but very religious father, Eugene. Eugene is very harsh with his two children and his wife, when he feels that they might be committing a sin, and his definition of sin is very broad. Indeed, his behaviour is not just abusive but close to torture. However, there is a different view of him in the community. He is very generous to very many people and in his newspaper, The Standard, he is not afraid to stand up to the dictatorial government, resisting both threats and bribes. When thing get bad with the newspaper, the children are sent off to their Aunt Ifeoma, Eugene’s sister, in Nsukka and she is a very different person. Though somewhat religious, she is very open-minded and happy to let the children be children. Kambili finds it difficult to adapt to this new-found freedom but, with the help of the priest, she does make some progress. However, Eugene drags the two children back, when he finds that his father, who has stuck to the traditional religion and is therefore considered a pagan by his son, is sleeping under the same roof as the two children. However, Eugene’s violence gets worse as does the political situation and the children again return to Aunt Ifeoma’s, though she has her own political issues to face. However, I found it all too predictable and, though Adichie tells her story well, it is not a great work.