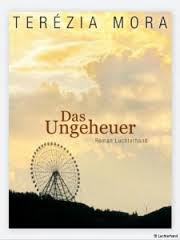 The latest addition to my website is Terézia Mora‘s Das Ungeheuer [The Monster], winner of this year’s German Book Prize. It follows on from Der einzige Mann auf dem Kontinent [The Only Man on the Continent], which told the story of the somewhat naive and simple computer engineer, Darius Kopp, from the former East Germany, and his wife, Flora, an immigrant from Hungary. At the beginning of this book we learn that Flora has committed suicide and Darius has had a breakdown since and stayed at home, living on pizza, alcohol and TV. His friend Juri, tries to get him to get a job but Darius decides to travel to Eastern Europe (and beyond), ostensibly to bury Flora’s ashes in her home country. We follow his journey but, at the same time, we read Flora’s journal as Darius is reading it, which he has translated from Hungarian. From it, he learns, to his surprise, that she was terribly depressed. He was completely unaware of this and this has a profound effect on him. His journey is something of an attempt to come to terms with this and get his life back on track. It is a superb novel and one that deservedly won the German book Prize. It has not yet been translated into English but I have no doubt that it will be.