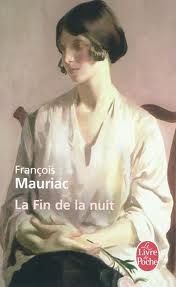 The latest addition to my website is François Mauriac‘s La Fin de la nuit (The End of the Night). This is a follow-up to his Thérèse Desqueyroux (Therese; later: Therese Desqueyroux), written eight years earlier. In his introduction, Mauriac makes it clear he wanted to continue the story of Thérèse. It is now fifteen years later and she is living alone in Paris, She is facing both financial and health problems. One evening, there is a knock at the door. It is her daughter, Marie, whom she has not seen for three years. She is naturally glad to see Marie but finds that the seventeen-year old has an ulterior motive. Marie is in love with Georges Filhot, son of a neighbour, and has left home to follow him to Paris, where he is studying. Thérèse persuades her daughter that she must return home to her father but, before departure, the two women go and see Georges. They spend some time with him and, once Marie has left, Georges comes to visit Thérèse, where he tells her that it is she rather than Marie he loves. The rest of the novel is how Thérèse deals with this declaration and tries to bring Georges and her daughter together. It is an interesting novel, if not quite as fine as its predecessor, and something of a departure for Mauriac.