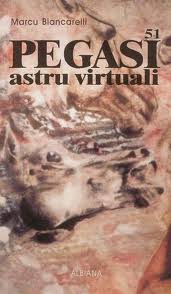 The latest addition to my website is Marcu Biancarelli‘s Pegasi astru virtuali (51 Pegasi, astre virtuel) [51 Pegasi, Virtual Star], the first Corsican novel on my site. Frankly, it is not a very good novel. The narrator, Marco, is a writer/professor, who has left Corsica for ten years and, when he returns, Corsica has become autonomous. One of his former students (of literature) has developed a virtual reality system based on the star 51 Pegasi, a real star which was the first to be identified with a planet orbiting it. However, this plays a relatively small role in the novel, despite the title. Marco is a thoroughly obnoxious character, putting everyone down (including himself), swearing, getting drunk, abusing people, fighting and so on. Apart from his behaviour, his brief relationship with the presenter of a TV literary programme and his drunken behaviour, there is not really much of a plot, except for Marco and his friend, the inventor of the virtual reality system, complaining about the disappearance of the Corsican language. Fortunately, I do own other Corsican novels, including one more by Biancarelli, and I hope that they will be better.