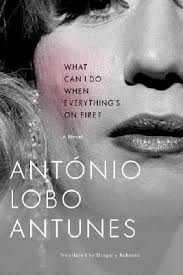 The latest addition to my website is António Lobo Antunes‘ Que farei quando tudo arde? (What Can I Do When Everything’s On Fire?). Like Antunes’ other works, this one is not easy. Antunes writes from the point of view of various narrators, who speak in half sentences, stream of consciousness and repetition. The story is primarily told by Paulo Antunes Lima, the son of a teacher, Judite, and a drag queen, Carlos, who gave him to another couple, who had lost their daughter through illness. Much of the story tells of the drag queen and junkie world of Lisbon, to which Carlos and Paulo belong as well of Paulo’s understandable issues with both his biological and foster parents. No-one in this story can be said to be happy but it does give a fine portrait of a fragmented, grim world, a view Antunes has of the country as a whole.