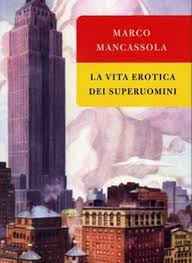 The latest addition to my website is Marco Mancassola‘s La vita erotica dei superuomini (Erotic Lives of the Superheroes). Don’t be put off, as I nearly was, by the title. This is not a silly, pastiche of superheroes. It is a serious book, where the main characters just happen to be superheroes. We follow the stories of a few superheroes, who have aged and lost some of their superpower prowess but still very much have sexual desires, which, in part, leads to their downfall. The main plot involves threats to various superheroes, who receive notes saying Goodbye, Dear … and, soon after, tend to die a violent death. The police are baffled as to who is killing them and why, though the superheroes themselves are more sanguine about it. However, the main interest of the novel involves following the stories of a few superheroes and their anxieties, brought on, in part, by ageing and, in part, by their increasing irrelevance. Superheroes are not important in a TV age, says one of them. Mancassola could have made this a jokey novel about superheroes but he does not. The superheroes seem to have all the foibles – and more – of the rest of us, particularly when it comes to sexual matters. It is an excellent book and deserves to be better known, particularly as Mancassola lives in London and the book has been translated into English (and French).