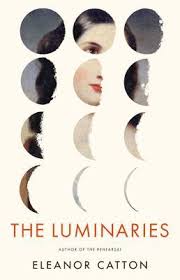 The latest addition to my website is Eleanor Catton‘s The Luminaries. It is on this year’s Man Booker longlist. Despite weighing in at 830 pages, it is not the longest book on the longlist (that honour goes to Richard House’s The Kills). I was particularly impressed with Catton’s first book, Rehearsal. However, while enjoying this latest book, I do not feel that it was of the same calibre as its predecessor. This book is a complicated, plot-driven novel, set in Hokitika, a small town on the West coat of New Zealand, during the 1866 gold rush in the area. Twelve men – nine of European origin, two Chinese and one Maori – meet in the lounge of the Crown Hotel to share information (they all have some individual piece of information to contribute) about recent events in the area, including the death of a loner who is found to have a stash of gold hidden in his hut, the rapid sale of his assets, the unexpected appearance of a woman claiming to be his widow as well as other events such as the apparent attempted suicide of a local prostitute and the disappearance of the most successful gold digger. They are joined by a newly arrived man, who also has some information to share. Half the book is taken up with the various stories and their background before we get both the backstory and subsequent events. It is a good read but I do not feel it as worthy as its predecessor.

4 Replies to “Eleanor Catton: The Luminaries”