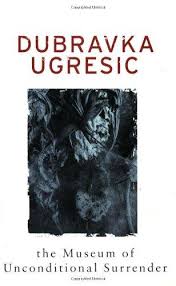 The latest addition to my website is Dubravka Ugrešić‘s Muzej bezuvjetne predaje (The Museum of Unconditional Surrender). This is another first-class novel from Ugrešić about her favourite topics: exile, the break-up of Yugoslavia and its consequences, her mother, a sense of community with other Slavs, language and memories. We get a lot of stories, in particular about her mother, herself an exile (from Bulgaria) but also about friends, fellow exiles, artists and herself. As she tells us at the beginning of the novel, the novel might appear bitty but it all joins together if you stick with it. We follow her wanderings, her meetings with writers and artists and what it means to lose your country and getting lost in another one.