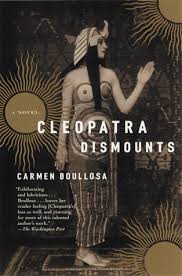 The latest addition to my website is Carmen Boullosa‘s De un salto descabalga la reina (Cleopatra Dismounts) . This is another funny, exuberant, post-modern, feminist novel from Carmen Boullosa, telling the story of Cleopatra and, in particular, her relationship with Mark Anthony. It starts and ends with the period just before she commits suicide, about a year after she and Mark Anthony were defeated by Octavian and his forces at the Battle of Actium. In between, Diomedes, her faithful servant (who appears in both Plutarch’s Life of Mark Anthony and the Shakespeare play) recounts key events from her life, both copying down her own words (though he admits to editing them) and giving his own account. Much of it is her love-hate relationship with Mark Anthony – lots of passion but also some bitterness – and her hatred for the Romans, who she considers to be a bloodthirsty and cruel people. We also see how she came to be Queen of Egypt, defying her father, her brother (who was also her husband) and other relatives and how she more or less held on, with the help of Julius Caesar and Mark Anthony as well, of course, as her downfall. Boullosa makes no bones about her support for Cleopatra and admires her for taking on the men – the Romans, the Cilician pirates, her relatives – and holding her own, till things went wrong at the end, but also shows her as a very sexual woman.

The latest addition to my website is Bernardo Esquinca‘s Los escritores invisibles [The Invisible Writers]. This novel is narrated by Jaime Puente, a would-be novelist who cannot get published. When he finally does get an offer of publication, it comes with strings attached. He has to deliver Roberto Rojas, his former teacher and friend, and his mysterious manuscript, which several publishers are trying to get hold of. Rojas, however, seem to have disappeared. Things get worse when Jaime finds a body in Rojas’ flat and he flees to a town where he meets the Guild of Housewives, who pass their time, unknown to their husbands, writing pornographic novels. Jaime gets somewhat too involved with the pornography and heads back home. As well as delving into mystery, pornography and failed novelists, Esquinca rails against publishers who are only interested in making money and not in literary quality. Not a bad book but it has not been published in English (or any other language) and I am not sure that it will be.