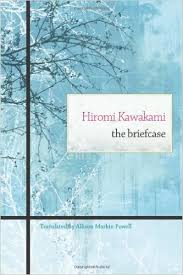 The latest addition to my website is Hiromi Kawakami‘s 先生の鞄 (US: The Briefcase; UK: Strange Weather in Tokyo)/ This is the quirky tale of the relationship between a thirty-seven year old woman, Tsukiko, and her high school Japanese teacher, some thirty years her senior, whom she addresses as Sensei, the honorific term used by the Japanese for their teachers. They meet by chance in a bar, where both go to eat and drink. She had forgotten his name, not least because she never liked Japanese class, hence her use of Sensei. They continue to meet by chance, when they bump into one another, usually at the same bar. They both enjoy their food and drink. The relationship develops slightly when they go to a nearby market together but does not seem to be developing into anything even vaguely romantic. They have a row – over the Giants baseball team, which he adores and she hates – and ignore one another for a long time but then resume cordial relations. They go to the high school cherry blossom festival and she leaves with a former high school boyfriend, now divorced, and he leaves with the art teacher. Again there is a break in the relationship but, as he says, there is a karmic connection between the two and things later resume. Kawakami tells a very charming tale of a relatively unusual relationship, with its ups and downs and what works and what does not, without getting in any way sentimental or trite.