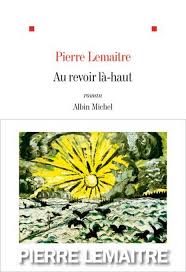 14 Replies to “Pierre Lemaitre: Au revoir là-haut [Goodbye, Up There]”