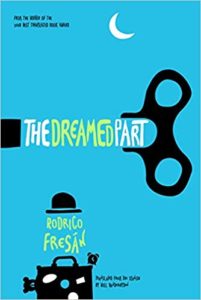 The latest addition to my website is Rodrigo Fresán‘s La parte soñada (The Dreamed Part), the follow-up to his La parte inventada (The Invented Part). Once again, we are following the anonymous writer and his travails. He now considers himself an ex-writer, as his career is going nowhere. As the title tells us, a lot of the book is about dreams (and sleep and insomnia), including the science of dreams but also dreams in literature and his own dreams. We even have a fictitious plague which stops most people from dreaming and an organisation which harvests the few remaining dreams. His mad sister and her obsession with Wuthering Heights and his obsession with Nabokov also feature. It is a long, rambling novel, as was its predecessor, but if you like long and rambling, you will learn a lot about dreams and literature.